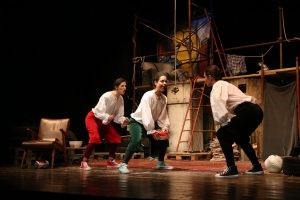 On the 31st of January 2020, the classes 3CLL, 3BLL, and 3ALLwith their teachers Mrs Bruno, Sterpetti and Masini  had the pleasure to go to the OFF/OFF Theatre, in via Giiulia,  to watch “Shakespeareshake”  (director: Sveva Tedeschi, screenwriter: Adam Long)

The show was outrageously funny, and didn’t hesitate to make fun of the famous writer’s works, in a key that even someone with only a basic knowledge of the matter would have understood and enjoyed.

Only three actresses played, dressing up as both the female and male characters, referencing the fact that in Shakespeare’s plays, and all plays of that time for the matter, only men were allowed to be actors, leaving them the roles of both genders.

It didn’t skim over any of Shakespeare’s work, and that’s impressive considering the amount of works, even in his early life, in an hour and half. To achieve that, though, unfortunately they had to compress his comedies in one sketch, nonetheless it was enjoyable; something worthy to be noted is the way they did it, which is by narrating a sort of sitcom like script, containing references to all of his comedies, and molding them into an absurd story.

The last sketch regarded Shakespeare’s most famous tragedy; Hamlet. At first, the actresses seemed reluctant to act out the famous play, but as it turns out, it was the longest sketch of them all; it also was the only interactive one, especially in the part where Hamlet rejects Ophelia, and she goes mad.

Firstly, they made a girl go up to the stage to be Ophelia, she only had to scream after Hamlet’s line, but they decided to represent her mind, too, and so the audience’s role was revealed. Different rows were requested to scream different phrases to represent her thought process. In the end, the girl made a chilling scream.

It was an entertaining and educational experience, and we’d like to go watch other plays like this one.